One of those things that we Visualists like to have as a way of expressing our elitism, is official goods. Posters and tour T-shirts seem to range in the higher levels of demand. These items are like our medals of honor. They show where we’ve been; they confirm, in a way, our devotion. In the case of Visual Kei and Jrock, of course, they also show a level of craftiness and capability, as it can be extremely difficult to get ones hands on items like this. Much of this stuff has to be purchased at goods-stands at live shows, or from the official-goods sites, where they can be extortionately expensive without adding buying-service charges (lookin’ at you, abingdon boys school). Plus, conversion rates and language barriers can create tiers of challenge unbelievable to, say, American-music fans. Yes, we are total bad-asses.

But sometimes getting your hands on the goods (literally) can be nigh impossible. And that aside, often the better way to show one’s devotion and love of a band or artist is to actually put your own creativity into it. Although it may not be as “legit” as getting an official poster or T-shirt (and of course we want to support the artist by purchasing them if possible), it can be just as rewarding to make something on your own.

In fact, in general I detest the whole idea of having to accept things because we believe we have no control over them. We lower our standards and buy the clothes we can find in the chain-stores because we think we have no other choice. Unless you have awesome skills in the sewing department, chances are that belief is probably pretty strongly ingrained. Being someone with a strict and heightened aesthetic, I have serious issues with just sucking it up and “living with it”. Nobody should do that– it’s demeaning. If you want something a certain way, you should believe that you can have it that way. And if you can’t buy it– make it. If you can’t make it– customize the living hell out of it.

Much as I wish (don’t we all) I could break out some badass sewing mastery on the spot and end up with a perfect replica of the red velvet suit Ruki is wearing on the cover of last spring’s FOOL MATE, though, that’s a bit out of my reach at this point. However, I’m not too cool as to be beyond basic home-ec, and this week I put my awesome abilities to use, and I thought I would share the finished project on here and see what you guys think of my incredible display of unforeseen capability. 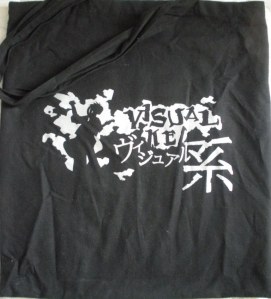 I started with a basic black Visual-kei emblem bag that I usually use to carry stuff like folders and sheet-music in. 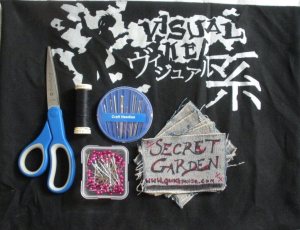 I know most people under, like, 35 would rather jump into a lake in the middle of March than admit to using appliques, but it’s actually a really simple way to customize your stuff. It requires minimal ability to wield a needle, and there are endless variations to how they can be made and used. In this case, I used swatches of denim with the dark wash facing in so the lettering would stand out brighter on the light side.

And here’s the finished product. I wrote everything by hand with a very fine-tip permanent marker…challenging the extents of my artistic ability. I’m pleased with how everything turned out, as I didn’t have to redo any of the swatches, and without using any stenciling or anything, I think the fonts came out alright. I tried to match official fonts as closely as possible, but in some cases I just sort of winged it. 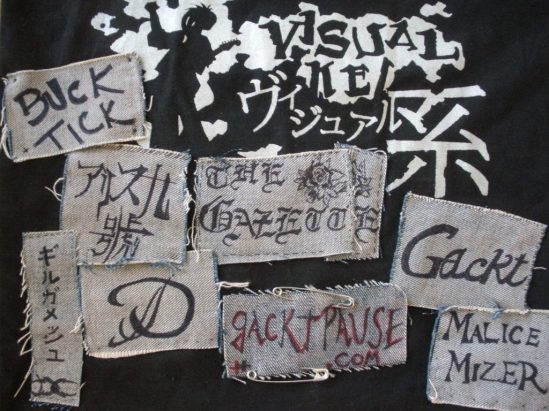 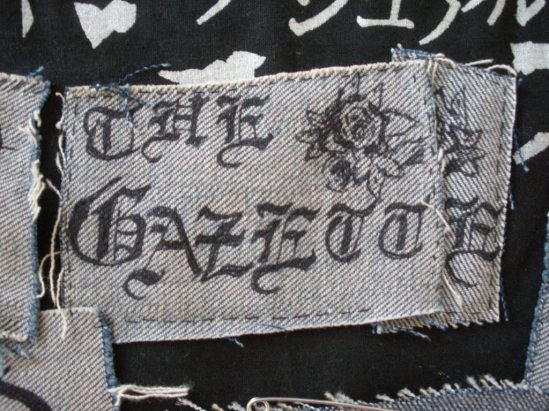 There are other bands I would like to add…I just didn’t want to take on too many at once because after 3 hours of stitching these things on I want to stab myself in the eye with the stupid needle and get it over with (thus the safety pins on the last one). Maybe in a couple of months I’ll feel ready to tackle adding D’espairsRay and MIYAVI. 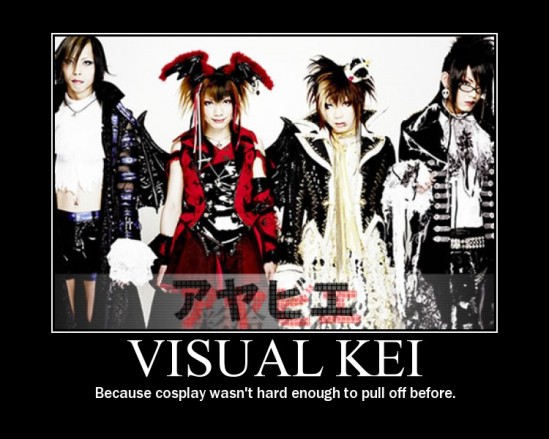 To follow up my latest post on Visual style and how it interfaces with cosplay, I’m going to take it upon myself to do a short series of featurettes displaying some of the best Visual Kei cosplay I’ve seen on the web lately. If looks could kill, these cosplayers would be unwittingly massacring the cosplay community.

As I mentioned briefly in Of Corset Is, in my personal opinion I believe that the true purpose of cosplay is not to achieve the most correct costume of the character, but to capture as closely as possible the essence and personality of the character. It is important to remember that despite what the image on hand shows you, you are your own person, and unless you adapt the cosplay to be true both to yourself as well as to the character you are portraying, the cosplay will never really hit the mark. I have seen some really wonderful cosplays, but the cosplayer donning them had spent so much effort on getting the exact pattern of brocade for their Ten-Ten tassles, that they forgot to affect her airs and that particular feeling we associate with her. I’m (a tiny bit) less fussy about anime and video-game type cosplays than Visual Kei or Jrock ones, because with VK and Jrock we are attempting to affect the styles of a real person, and besides that– I’m just wicked touchy about the subject. ;)

The reason I have chosen to feature these particular cosplays, is because the cosplayers have done an exceptional job not only at piecing together the outfits, makeup, and hair-styles, but they have also worked to portray as closely as possible this elusive essence of the object of cosplayification.

Crimson leaves are starting to fall, and rockers far and wide are digging up corsets, frock-coats, and implements of bondage to identify with the gloomy change in weather.

The other day I was talking about how Halloween is coming up, and how I will be spending it at a con. I hope the rest of you have interesting plans for the gloomy un-holiday. I at least hope that you have a party to attend, where much Malice Mizer will be blaring. Martha Stewart suggests complicated green curries cooked in gutted pumpkins, and acrylic-nail application parties for Les Halloween ’09. But we’re a long way from Connecticut, Visualists… 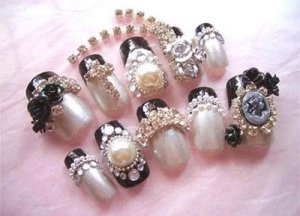 Visual style has wormed its way into the apple of rocker fashion. Most Visualists are rooted strongly in their individuality and creativity, hacking their own look into the world of Visual style. However, because of the nature of Visual style and the rising popularity of Visual Kei as a mainstream genre, it has also transcended personal style and gone into the, shall we say, band-boy-band-girl and/or cosplay modes of expression. A lot of people who appreciate Visual Kei style and music feel that cosplay and band-fan-dom is a way of forging a closer bond to their favorite artists and bands.

Although I personally believe in Visualism and Jrock as a life-source, not to mention life-style, I also believe in cosplay  as legitimate means of expression and appreciation of bands and idols. Even if you decide to do a simple cosplay, and can’t find all the Moitie accessories to glam up your Mana-sama, cosplay well, (and this goes for everyone across the board—) and cosplay with integrity. There’s nothing less appreciative of a band or specific band member than half-assing your depiction of them. If you’re short on time, cash, garb, gear, or all of the above, consider simplifying your effigy by focusing on several very characteristic traits (hairstyle and makeup, for example…whatever the personality is really defined by.) and toning down the other elements. For example, Kanon Wakeshima? Broke? Full-time job (yup, they do go together)? Con in a week? Simple solution! Focus on the hair and makeup and any accessories you can manage, and then try and emulate the experience and sentiment of her outfit without actually recreating it in full! This is much more appropriate than buying a $14 cheesy prom dress from Salvation Army and hauling a cello around. 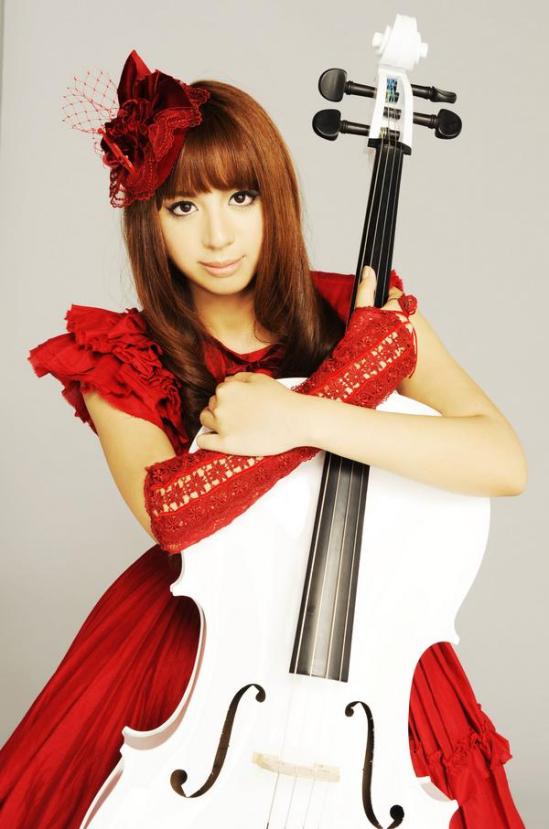 …and remember…next year, start making the costume right after the convention, not right before. (To be fair, I tried this and failed miserably. Wish me luck that I don’t return a hypocrite….Not that you’d know  either way :D).

Whether you’re seeking to improve your own Visual style, or considering cosplaying your favorite band-member, here is something that may help along the way– and remember, do your best, and have fun! ganbatte ne!:

If you’re totally green to Visual style, but want to go the whole nine yards, a DVD was released in September called Visual Makeup Lesson. The DVD has a variety of lessons to show Visualists how to do typical Visual Kei style makeup. Japanese language with English subtitles. Learn it from the best– and by that I mean, of course, learn it from the Japanese… 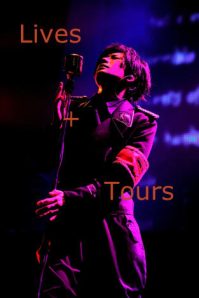